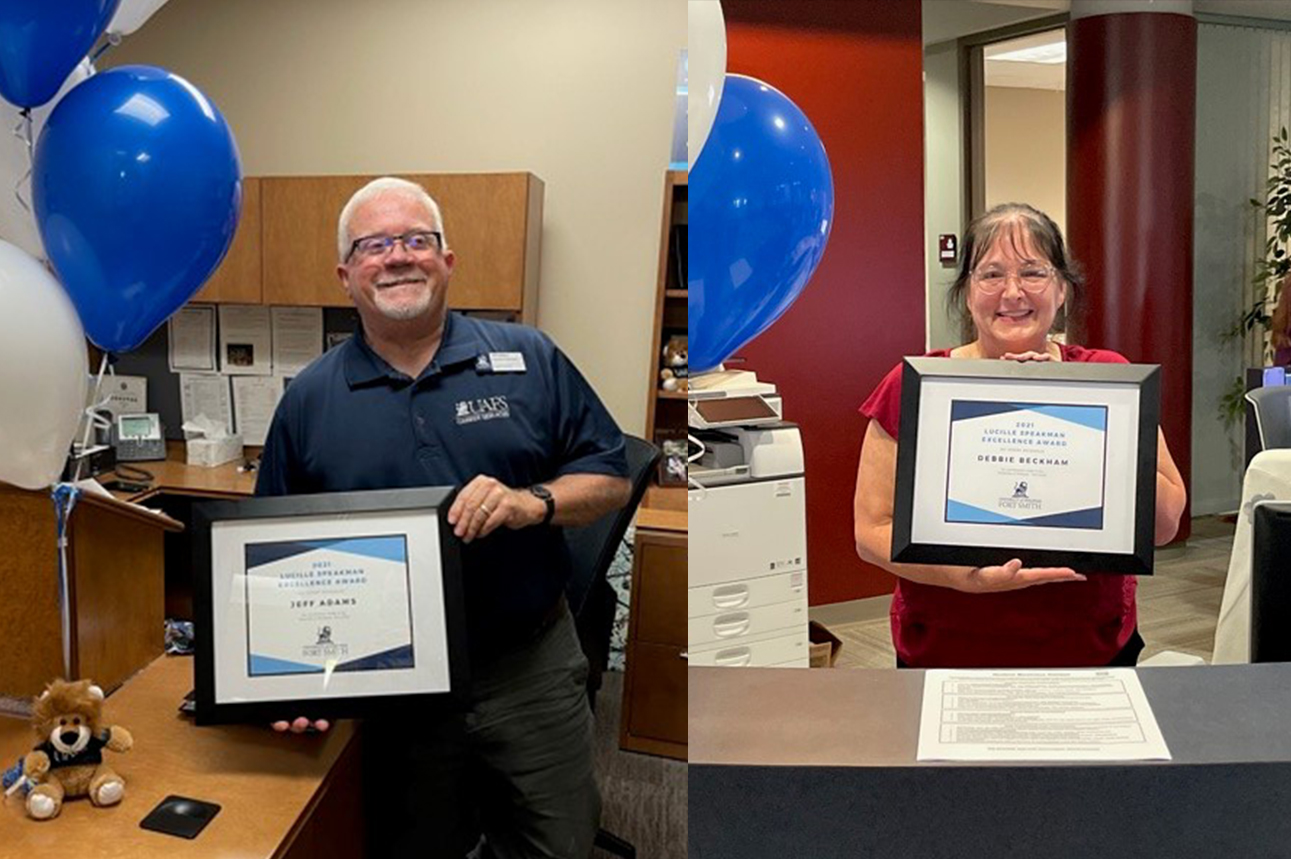 Adams, left, and Beckman accept their awards ahead of the Virtual USC All Staff meeting.

The University Staff Council at the University of Arkansas – Fort Smith presented Lucille Speakman Excellence Awards to Deborah Beckham and Jeff Adams, both of Fort Smith, during its annual staff meeting on September 29.

The award is named for the late Lucille Speakman, a longtime teacher, administrator, and member of the Board of Trustees when UAFS was a two-year community college In addition to the honor, Beckham and Adams will each receive a $2,500 monetary award.

Beckham is a support specialist in the Financial Aid Office at UAFS, where she implements her knowledge of financial aid processes to help students plan and pay for college.

“She genuinely strives to serve our students well, follows up promises, volunteers to take on new assignments, frequently supports various UAFS events, and articulates a passionate and deep-seated commitment to our collective success,” said Dr. Lee Krehbiel, vice chancellor of Student Affairs and Enrollment, who noted she was an exceptional candidate for the award.

Beckham has worked at UAFS for four years and earned a bachelor’s degree from UAFS in 2017 while working on campus full time.

“To think someone is comparing me to Lucille Speakman is truly an honor,” she said Beckham, who knew the award’s namesake personally.

Jeff Adams serves as the assistant director of career services and the Babb center for student professional development at UAFS. Previously Adams, who has been with UAFS since 2011, served as the director of the Center for Lifelong Learning.

“Jeff has done an outstanding job of placing the students with one of their top choice internships. In addition, he has developed contacts with numerous criminal justice agencies in the area to support placement efforts. Jeff is always willing to do whatever it takes to help students succeed,” Kroutter said.

“Jeff is one who gets it done, but also one who likes to have fun while doing it. In short, my kind of person!” said Carol Miller, a project specialist in the Office of the Vice Chancellor for Finance and Administration “You don’t have to be around Jeff for very long to know that he has a passion for the institution and learning. He is willing to do whatever he can to further the mission of the University,”.

Adams is a member of the local Commissary Kiwanis Club where he volunteered to read to kindergarten students, helped plan the community garden at Sutton Elementary, and start the “K-Kids” organization at the school as well.

Susan Krafft, executive director of Career Services, who nominated Adams for the award, added, “Outside of the office, Jeff has spent many years volunteering with the Cub Scouts Pack 11 at Euper Lane Elementary School, even after his son grew older and moved up to Boy Scouts. Not only did he hold leadership positions, but he worked ‘boots on the ground’ during food drives, popcorn sales, and other fundraisers, plus camping trips.”

“We are so glad to have Jeff as a member of our team and know that UAFS is better for his service.”

The University Staff Council is comprised of all UAFS full- and part-time employees who are not deans, members of the faculty, or members of the chancellor’s senior staff. Previous Lucille Speakman Excellence Award winners select the new recipients.