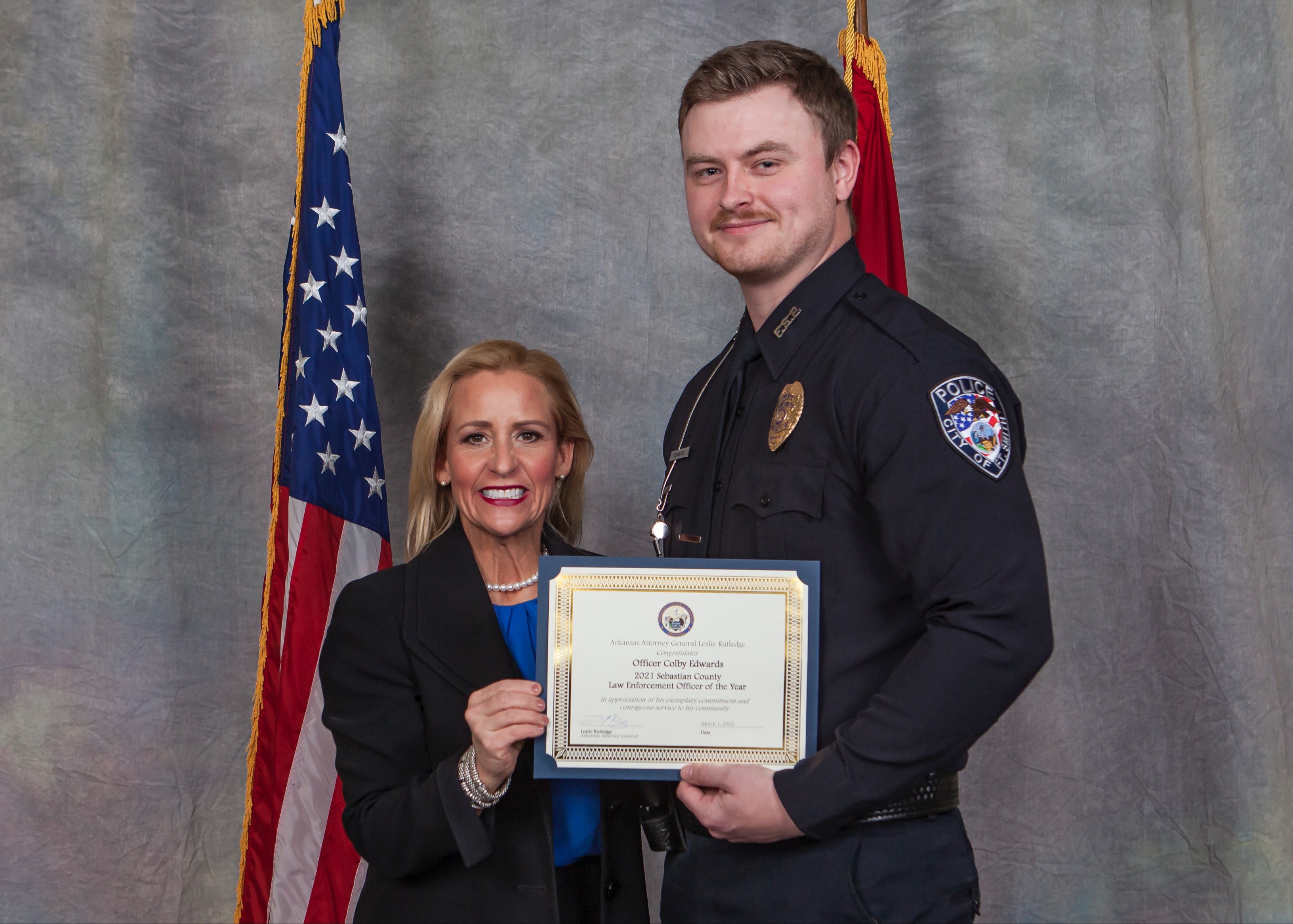 During his first year on the force, 23-year-old Fort Smith Police Officer Colby Edwards experienced a whirlwind of press attention and commendations after using his skills, knowledge, and compassion to de-escalate a dangerous situation and save a troubled man’s life.

“Since I was a kid, I always wanted to serve,” said Edwards, “And what better area to be a cop than the place you were born and raised?”

On April 10, 2021, Edwards was first at the scene of a domestic disturbance.

“It was one of the scariest moments,” he said. The potential for violence was high, and a man in mental distress had brandished a weapon. “People do what we do all the time around the world, and looking back on it, we were just doing our job.”

But months of police training and four years of Criminal Justice study at the University of Arkansas – Fort Smith kicked in, and Edwards knew what to do. He and fellow FSPD officer Clinton Shown de-escalated the situation successfully, and the individual in crisis got the mental health care he needed.

Police Chief Danny Baker presented the officers with commendations for their patience and de-escalation skills, noting his pride for the two officers and the entire department on April 25, 2021.

Every Fort Smith police officer is trained in de-escalation tactics and crisis intervention.

“There are days when things don’t go right, but during those times, I think back to why I started this job – why I wanted to be involved in it, and it’s because of the community of Fort Smith.” Edwards said, “It’s a great community of people here.”

While at UAFS, Edwards immersed himself in his studies, learning all he could from his professors, including Dr. Brian Rice, Dr. Don Balch, and Dr. Paul Kroutter, all of whom encouraged his dreams of being in the police force.

He completed two internships, one at the Greenwood Police Department and one during his time at the Arkansas Police Academy.

His commitment to his training and education meant that he was ready to serve the community when he crossed the stage at graduation.

“Colby is one of the best students I’ve had at the university,” said Dr. Rice, assistant professor of Criminal Justice at UAFS. “I’ve seen him out as an officer, and I know what he’s doing. I think he is the prime example of what we want one of our criminal justice students to be once they graduate.”

A year later, with many more experiences under his belt, Edwards again found himself in the spotlight, earning Sebastian County Officer of the Year at the 2021 Law Enforcement Officer of the Year Awards hosted by Arkansas Attorney General Leslie Rutledge.

“There are going to be a lot of ups and downs in the criminal justice field,” said Edwards, “But you just keep your head high and remember why you want to do this job. Helping the children and people in this city is what motivates me to do what I do.”