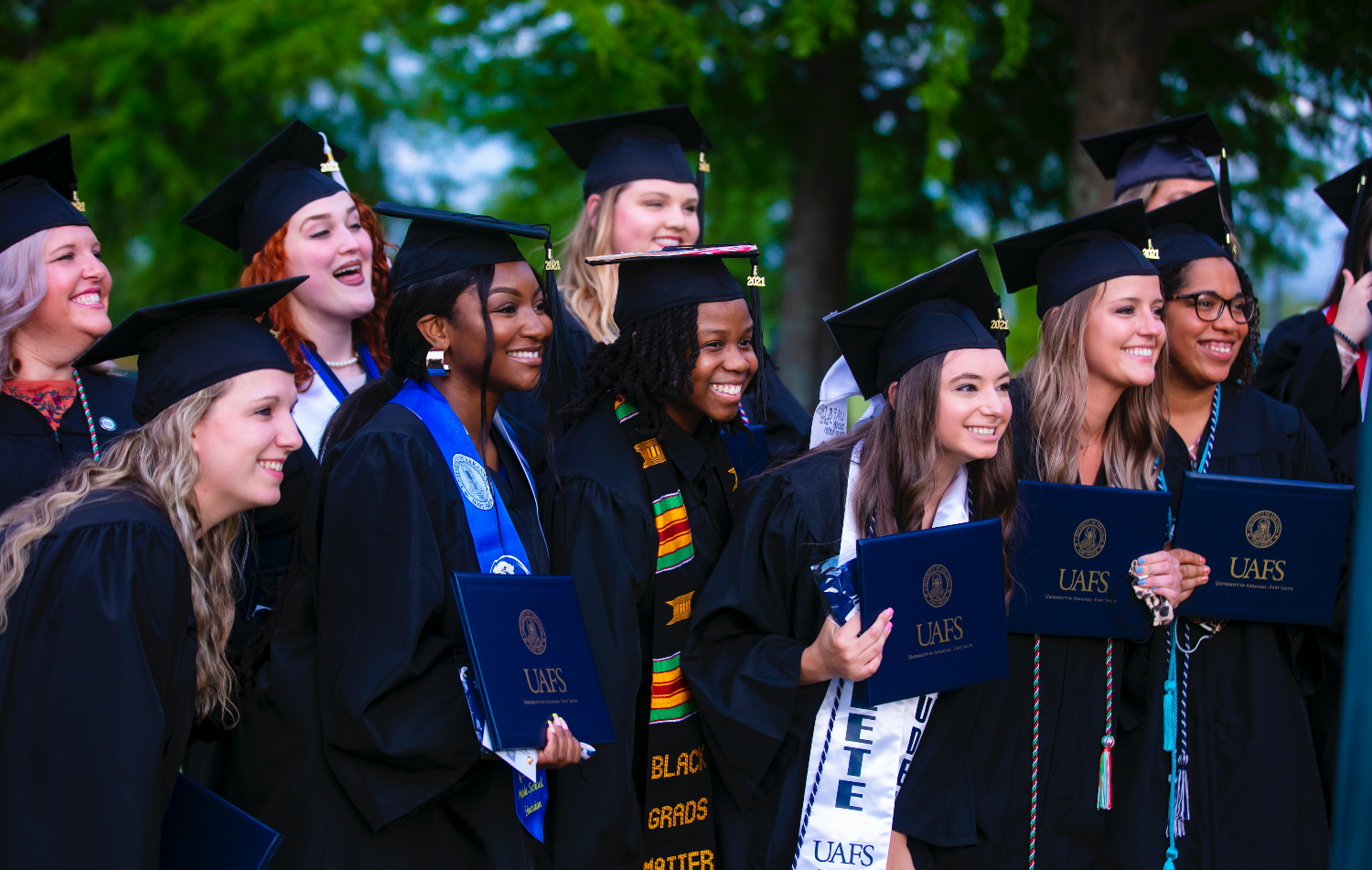 Saturday, May 7, 2022, the University of Arkansas - Fort Smith will honor close to 800 spring and summer graduates at the university’s 106th commencement ceremony. This year’s graduates will range in age from 17 to 59 and have collectively earned 244 Certificates of Proficiency; 73 Technical Certificates; 175 Associate Degrees; 475 Bachelor’s Degrees; and 11 Master’s degrees.

Hanna is active in the Fort Smith regional community on several projects. The Hanna family is a gracious supporter of the UAFS Family Enterprise Center and a proud partner to UAFS in the development of the new Center for Economic Development at the Bakery District. Hanna serves on several non-profit boards as well as the First Bank Corp. and UAFS Foundation boards.

He is married to Adrienne Hanna. They have three sons, two daughters-in-law, and two grandchildren.

Kim Miller, FACHE, MBA, RN, serves as the Western Region President of Baptist Health, which comprises two hospitals and total revenue of $280 million, leading 1,600 employees, 85 volunteers, and a medical staff of 332. Baptist Health is the largest and most comprehensive non-profit healthcare system in Arkansas.

With more than three decades of executive leadership experience in the healthcare industry, Miller has an accomplished track record guided by strategic thinking, vision, and astute business skills that have enabled her to deliver consistent and impressive results in highly competitive markets. She is a leader in cultural transformation. Miller is passionate about and dedicated to a forward-thinking philosophy that enables her to mentor and invest in the growth of the people in her organization. She has developed a strong network of colleagues across the healthcare industry and is recognized as a visionary, a thought leader, and a recognized national speaker.

Miller was appointed to her role at Baptist Health after serving as president and CEO of Beaver Dam Community Hospitals, Inc., in Beaver Dam, Wisconsin. Under her leadership, the organization was transformed from a non-profit community hospital into a complex independent health system. She directed multiple growth initiatives and negotiated several acquisitions, including a medical office building, numerous medical and specialty practices, a retail pharmacy, and numerous residential properties. The acquisitions resulted in the growth of annual consolidated revenue from $97 million to $238 million, with net revenue of $110 million. Under her direction, employee satisfaction consistently exceeded Midwest and national norms.

Billy D. Higgins holds an M. A. in History from the University of Arkansas and is an associate professor of History at the University of Arkansas – Fort Smith. He has taught courses entitled the New Republic and the Age of Jackson. He has written four books and co-authored with Stephen Husarik and Henry Rinne “The First 85 Years,” a history of this university. His first book, “A Stranger and a Sojourner: Peter Caulder Free Black Frontiersman in Antebellum Arkansas,” was the co-winner of the Arkansas Historical Association’s 2005 J.G. Ragsdale Award for the best book-length study of Arkansas History.

Over his 30 years on campus, Higgins chaired the Faculty Senate, the Curriculum Committee, and the Faculty Development Committee. His faculty colleagues have awarded him the Lucille Speakman Award (1996), the Whirlpool Master Teacher Award (2005), and the Excellence in Scholarly Research Award (2014). In 2019, the Arkansas Historical Society presented him with its Lifetime Achievement Award.

He served 10 years as editor of the Journal of the Fort Smith Historical Society, where 19 peer-reviewed historical articles about the city and region written by UAFS students were published. He is the past president of the Fort Smith Boys & Girls Club Alumni Board and a founding board member of the Hardwood Tree Museum. Peggy, Billy’s wife of 49 years, is the mother to their two children, Tim and Lea, both college graduates.

A Vietnam War veteran, Higgins says that his greatest rewards and thrills in life have been the teaching, learning, advising, listening, and coaching interactions with students and alumni of the University of Arkansas - Fort Smith.