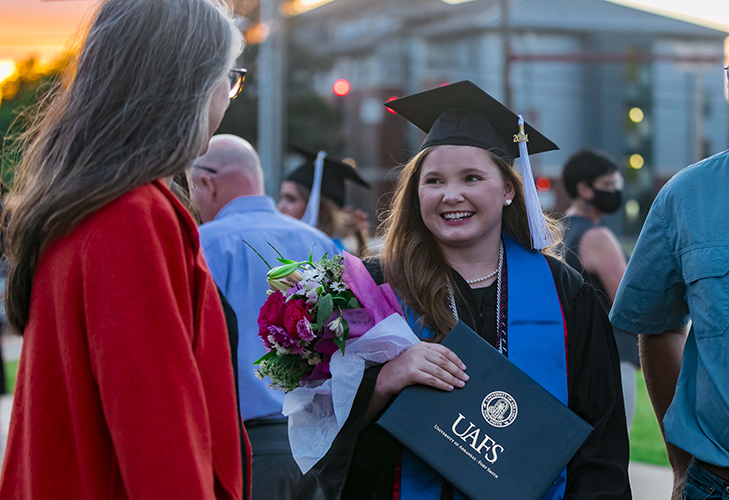 Haylie Sigmon: No matter what stands in her way, Sigmon finds a way around or above it to reach her goals.

Haylie Sigmon’s life could have easily gone in a different direction. As a child, she was shuttled from home to home, too often finding herself in abusive situations. A perceptive child, she realized early that she would never find stability beyond what she created herself. So, determined to improve her life, she threw herself into her education and learned to lean on God.

Her hard work in high school paid off in the form of several prestigious scholarships, including the Chancellor’s Leadership Council Scholarship, which made it possible for her to attend the University of Arkansas - Fort Smith. She set her sights on becoming a nurse and fulfilling a life-long dream to better the world.

As a first-generation college student with no immediate role models, she dove head-first into her studies - and nearly every collegiate experience that came with it. At every opportunity, Haylie took the chance to develop herself, hone her leadership skills, and give back to her UAFS community.

She was active in the Lions for Christ Ministry and served as the director of Cub Camp. She served twice on the Student Government Association, once as secretary and she was a student ambassador, coordinator of the Lions ROAR Drug and Alcohol prevention programs, and president of the May 2021 Nursing Cohort. Through it all, she excelled academically and socially and found time to plan a wedding and marry her high school sweetheart.

Her involvement helped her grow in many ways.

“I was encouraged to identify and stand up for the things I believed in,” she said. “Dr. Dave Stevens always says ‘leaders eat last’ and it’s become a mantra of my own. I learned what servant leadership looks like working with Dr. Stevens, Chancellor Riley, and Dr. Korvick.”

Through all of her life experiences and her triumphs over hardships, Haylie found the strength she would need to battle first a small tumor on her pituitary gland and then a brain malformation. In January of 2021, doctors told her she needed immediate cranial surgery.

But Hailey had other ideas, ideas that included graduating on time. And so her surgery, ultimately successful, waited until mid-May, just days after she crossed graduation stage.

Sigmon has high praise for the Nursing faculty, including executive director Dr. Paula Julian, who encouraged and supported her during her last semester. But her gratitude goes further.

“I am eternally grateful to the faculty, staff, and administrators that I have met here at UAFSwho have encouraged me to take leaps of faith, speak in front of crowds, plan events, train peers, and stand up for positive change. I can say with certainty that due to my time here and the people I have met, I can move forward with confidence in my future career and personal goals.”

In August, she met one of those goals when she started work at Baptist Health, working as a nurse in the Cardiac Step-Down Unit and in the Cardiovascular Intensive Care Unit.