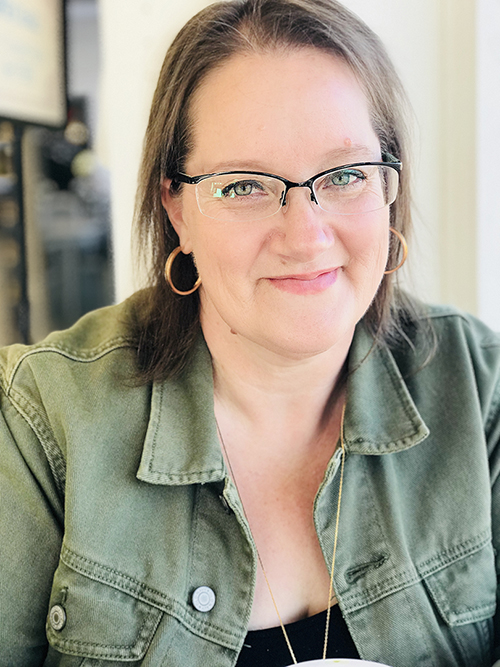 Caroline Speir: The executive director of the Fort Smith Museum of History decided to finish a history degree at UAFS after seeing Tom Wing talking about historic re-enactment.

Today, Speir, University of Arkansas - Fort Smith class of 2020, through a crocked path of educational events, work experience, faithful determination, and a fleeting vision of Tom Wing, is the executive director of the Fort Smith Museum of History.

A Fort Smith native, Speir started college right out of high school, but life has a way of derailing plans, and Speir dropped out of school and spent several years as the single mother of three girls.

Then one day around 2006, while sitting in a hospital waiting room on a visit to a relative, Speir saw a TV set to the UAFS access channel. And there was Tom Wing, now an assistant professor of History and director of the Drennen Scott House, UAFS’s Van Buren historical site. Wing was talking about reenactment as a way of interpreting and understanding history.

Caroline Speir had a shock of insight. This was how she wanted to study history, but she needed to work it around the obligations she already had.

One of those obligations was work. In 2008, she was a paraprofessional in Roland schools, working with Leisa Gramlick until Gramlick left became the executive director of the Fort Smith Museum. Shortly after that, Gramlick convinced Speir to join her.

She started at the museum as a historical interpreter, and in 2009 she became the exhibit designer, and she found satisfaction in the job.

“I’ve done some reenactments,” Speir said. “But I like other kinds of interpretation more.”

Speir doesn’t like to talk about visits to the museum. Instead, she talks about “experiences.”

“Historical interpretation has many meanings,” she said. “It should connect with people on an intellectual level and on an emotional level. When people interact with history, they understand it better, remember it more, and maybe let it impact their lives.”

After Gramlick retired, it took some consideration for Speir to decide to apply for the position. She wasn’t sure she wanted to give up her hands-on work as an exhibit designer.

Eventually, it became clear to her that her institutional knowledge and belief in the museum’s mission made her the ideal candidate. The museum's Board of Directors agreed. So in 2019, she became the executive director of the Fort Smith Museum of History. But in an organization so modest, Speir became convinced she could still design and build exhibits.

One part of her job that Speir especially values was the chance to travel to Cisterna, Italy, to renew the relationship between Fort Smith and its sister city.

Although some downsizing happened in 2020, Speir is ready to look ahead for the museum. At 110 years old, the Fort Smith Museum of History has somewhere between 40,000 and 50,000 artifacts, and the historic – read old – building is feeling the weight of time and opportunity. A virtual fundraising campaign is underway, and John Milner with MAHG is developing concepts for an expansion.

The memory of city residents’ living in tunnels during the four to five months Cisterna was bombarded is fresh, as is the notable liberation of the town by Fort Smith’s native son, William O. Darby commanding Darby’s Rangers, precursors to today’s Army Rangers.

Speir achieved another goal while she was executive director of the museum: she completed her bachelor’s degree in History/Public History.

As for what comes, she’s more certain about the museum than herself. She’d like to add connections between the museum and the local community. She thinks the museum could be an agent for change, providing resources for events like an international festival.

As for herself, Speir said maybe she will pursue a master’s degree in History. Maybe she’ll teach. Maybe she will research a local history project, like events surrounding the Cubans at Fort Chaffee.

The universe has brought her this far without a clear plan. She’s sure to recognize the next step when it presents itself.