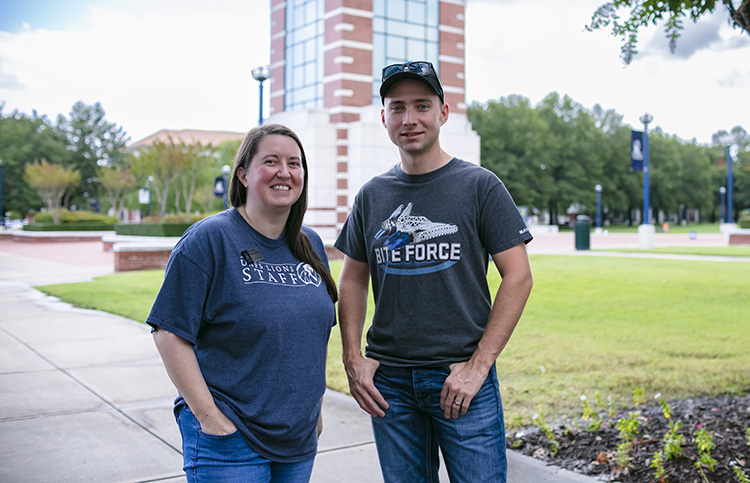 Andy would say it was no big deal, but his sister Darcy sees it differently.

“He is a lifesaver,” she said recently.

Andrew Gibson and sister Darcy Parker are alumni of the University of Arkansas - Fort Smith, classes of 2011 and 2016, respectively. They are talking about one of those potentially life-changing events.

On May 4, Prairie Grove police officer Tyler Franks and his partner Andrew Gibson responded to a domestic call, something police know is always unpredictable. On this occasion, violence broke out.

Franks entered the scene first. The suspect fired three rounds from a shotgun and a semiautomatic pistol, according to the Prairie Grove Facebook page. Franks was struck in both legs. Gibson pulled his partner to safety and placed two tourniquets on Franks’ left leg, which authorities have said saved his life. Franks’ left leg ultimately was amputated, and he continues his rehabilitation.

Gibson is a graduate of the Criminal Justice program at UAFS. He said it was always his plan to pursue a career affiliated with law enforcement. His father started as an auxiliary deputy and then became a police officer, retiring from that position.

“I was introduced to law enforcement at a young age and always looked up to them as the go-to protectors of the community,” he said.

Gibson believes his Criminal Justice degree prepared him for his career in two ways.

“It laid the foundation for understanding common practices in corrections, the justice system, and law enforcement in general,” Gibson said.

But he also learned skills that are harder to measure.

“I also established friendships through networking with classmates and professors who helped fast track me into law enforcement,” Gibson said. “I greatly value my education from UAFS and wouldn’t be where I am today without it.”

In September, the Arkansas Association of Chiefs of Police named Franks and Gibson the 2021 Motorola Solutions Officer of the Year.

Darcy Parker, who works in the UAFS Testing Center, is not surprised about the award or the events that led to it.