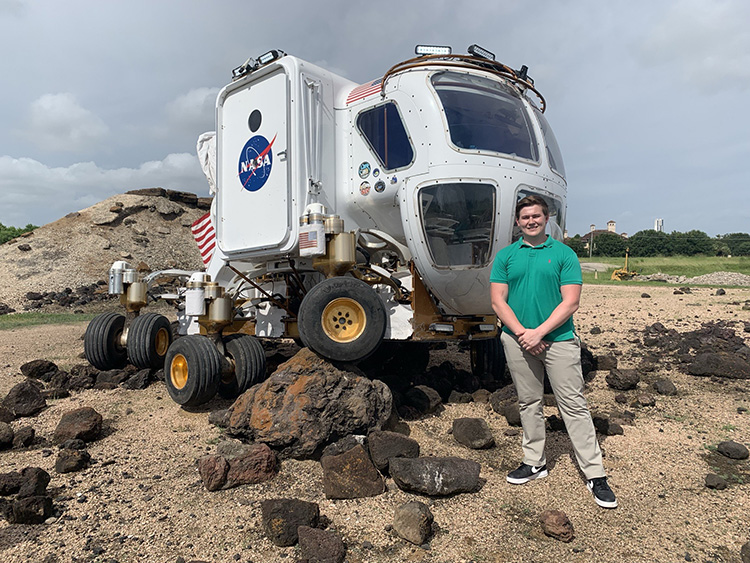 ANTHONY MING: Work on rovers for the moon and Mars was a great experience, but Ming's favorite job at NASA was working with astronauts at the International Space Station during a space walk.

Electrical Engineer Aims for the Star

Anthony Ming has spent more than a year working as an Engineering Pathways intern at the Lyndon B. Johnson Space Center, NASA's center for human spaceflight in Houston, Texas, where human spaceflight training, research, and flight control are conducted.

In his time at NASA, he’s worked four rotations. During his EC5 rotation, he worked as a space suit engineer and helped the team developing the next xEMU space suit (intended for Moon exploration in 2024) by designing various space suit testing equipment. In rotation CX3 - Extra-Vehicular Activity (EVA) Systems Operations, Anthony learned from the real men and women behind “Houston, we have a problem,” and studied the methods they use to keep astronauts safe during Spacewalks outside of the International Space Station. And during his ES5 - Mechanical Design and Analysis Branch - rotation, he helped assemble the VIPER rover which will be used on the moon in 2023 to prospect lunar resources. As well as design mechanical systems for international space docking.

“Being able to work with and support astronauts with the amazing things being done in space is indescribable,” he said.

Back in Fort Smith for his final semester, he is leading a team of 13 UAFS engineering students building a new  Lunar Terrain Vehicle (LTV) . Anthony's team at NASA at the end of Spring 2022, and give engineers “insight on our design to potentially use parts of it on the Moon in NASA's final LTV design which is launching.”

Throughout his time at UAFS, Anthony worked on interplanetary rovers with his Engineering professors and student colleagues. “I have to thank the entire engineering faculty for my successes, especially Dr. Lewelling as he has been my mentor throughout college,” he said. “I started working with him on the rover projects my sophomore year, and he encouraged me to apply to NASA.”

“The projects and teams I've been able to be a part of at UAFS gave me great experience that I was able to use directly to build my knowledge, and then leverage to gain other internships and even more experience leading up to where I am now.”

Though he added a year to his college experience to have the time at NASA, Anthony has no regrets. “I hope to return to NASA as a full-time deep space mechanisms design engineer working with rover designs and lunar habitats to help make us interplanetary,” he said with pride - and confidence