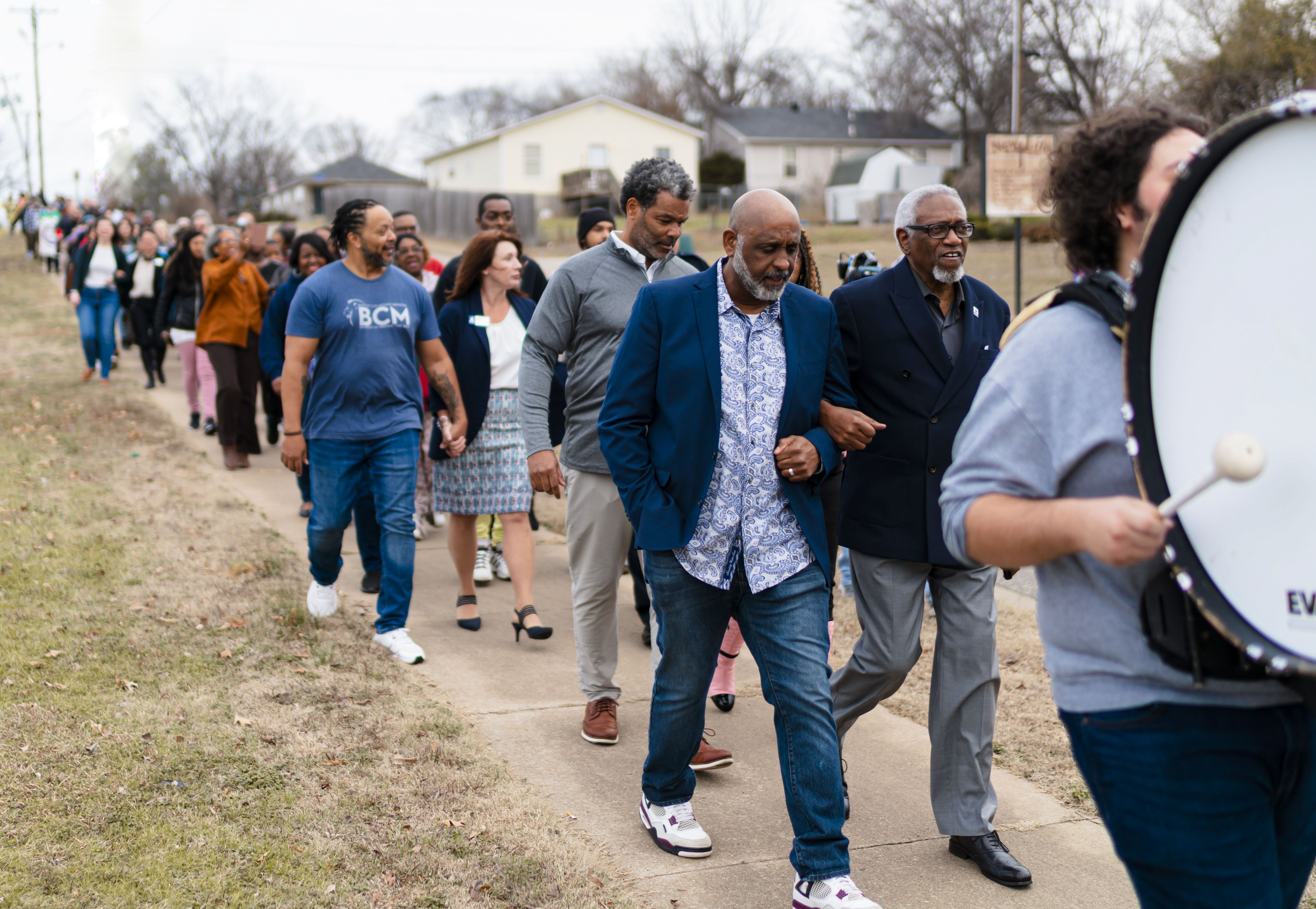 Community leaders and engaged citizens of the Fort Smith community gathered at Elm Grove Community Center Monday, January 16, to honor the life and legacy of Dr. Martin Luther King Jr. during the University of Arkansas – Fort Smith’s annual breakfast and panel discussion.
Extolling the importance of fostering community-based solutions to societal problems, panelists focused their discussion around the theme “Crossing the bridge over troubled waters.”
The panelists - Carl Geffken, Fort Smith City Administrator; Keith Gibson, member of the Arkansas State Highway Commission; Dr. Ann-Gee Lee, UAFS Professor of English and Rhetoric, Advisor to the UAFS Cultural Network, Read This Program Advisor, and Literacy Council Board Member; Karla Palma, a community organizer with Arkansas United Community Coalition; and Jay Richardson, State Representative-District 49 – spoke to hundreds of guests. Nya Stewart, a UAFS student-athlete and media communication major, moderated the panel.
Discussion centered around ways leaders can engage the community to solve problems and the importance of speaking and listening with an open mind.
Launching into the troubled waters theme, Geffken joined Fort Smith Mayor George McGill in commending the way the Fort Smith community and the Fort Smith Police Department responded to the killing of George Floyd and the nationwide protests that followed. The need for community-oriented policing has been clear, Geffken said, echoing McGill’s sentiment that Fort Smith’s commitment to its people is ahead of the curve.
“It shows a level of respect and a belief that our system can work as long as it works for everyone,” Geffken said.
Richardson said that most people are familiar with the overarching issues facing society.
“They don’t catch you by surprise,” he said, but the personal issues that impact the day-to-day lives of citizens require careful listening. “When we moved back to Fort Smith …, we walked the neighborhoods, talked with friends, and found our way into where we are today. And our greatest opportunity will come as we collaborate with others for what benefits our city.”
Richardson, a Democrat, gestured to colleagues around the room from the opposite political party, commending them on their dedication to doing what is best for Fort Smith, political affiliations aside.
Palma, too, said intentional advocacy and careful listening could impact solutions that cross the political divide. A DACA (Deferred Action for Childhood Arrivals) student herself, Palma learned to adapt her message to create unity toward the goal of passing Arkansas Act 746, formerly HB 1735, which allowed the state’s nearly 5,000 DACA recipients and other immigrants with work permits to obtain any professional or occupational license in Arkansas.
“We knew we could shift the discussion from immigration to the workforce,” she said. “Getting involved and seeing that you can change laws has been the highlight of my adult life. … And now my sister can have a teacher who looks like her.”
Richardson, who supported the legislation, described the momentum that builds when impactful legislation passes. “We are working relentlessly for our community. We are entrenched in our community, and we will continue to work and support as we always have.”
Dr. Williams Yamkam, associate professor of political science and chair of the UAFS Democracy Project, closed the panel by encouraging all of the attendees to go forward into the community to engage, educate, and empower others in the name of building and crossing bridges over troubled waters.
Following the panel discussion, Talicia Richardson, bullhorn in hand, called community members to march in King’s memory. Unlike a parade, she said, the symbolic march engages everyone as equal participants rather than performers and spectators. The crowd assembled as the Northside and Southside High School bands performed a stunning rendition of “We Shall Overcome.”
With arms linked and hand-in-hand, members of the Fort Smith community marched around Martin Luther King Jr. Park in Fort Smith, creating a compelling visual commitment to unity to close the day.

Collection boxes from the River Valley Regional Food Bank will be set up to collect peanut butter, reflecting Dr. King’s 1964 quote, “I have the audacity to believe people everywhere can have three meals a day for their bodies, education, and culture for their minds, and dignity, equality, and freedom for their spirits.”

(A collection bin will also be placed at the Elm Grove Community Center on Jan. 16.)

A Public Lecture on the Civil Rights Movement by Dr. Matt McCoy

A Public Presentation on Collaboration to Foster Cultural Tolerance by Dr. Ann-Gee Lee

Celebrations in the Fort Smith Community:

A Concert of Prayer